I am the youngest of four boys born to David (son of Frank and Dona Vaughan) and Clara (daughter of Clifford and Lucia Adkins) on the Fourteenth Day of the Nineth Month of the Common Era Year 1964. In ascending chronological order my brothers are Clifford Ray, Terry Wayne, and David Lee Jr. Their wives are Tammy, Rhonda, and Jackie in the same order (I omit their middle names out of fear). Clifford and Tammy have one son - CJ. Terry and Rhonda have two children - Cameron and Lisa. Cameron has two sons, Trey and Robert, and two daughters: Sophia and Gracie. David and Jackie have a daughter and two sons - Lauren, David Lee III (or 'Trey'), and Joshua. 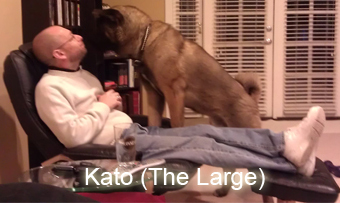 I alone, of my brothers, remain unattached. It's not so much that I do not wish to marry, as I like being single. Or, maybe it's because I'm a cat person? Yes, I'm a cat person. Of course, I have a dog (Kato, The Large) and have had dogs in the past (e.g., Sabastiana the Good, RIP), but that does not make me a dog person. I have also had many cats; most recently Lucia, The Magnificent (RIP), as well as fish, horses, etc.

So, you might reasonably ask, if it's not the kind of pet you own, what determines if you are a cat or dog person? (There are, by the way, only cat and dog people; there are no fish or horse, or bird, or snake people. Those are not proper categories of persons.) It really has to do with personality. Dog people need a pack. They need to have others around to give them a sense of place and value in the world. Cat people, on the other hand, tend to be more self-sufficient. They will tolerate other people so long as they do not interfere with their plans, desires and mood. But make no mistake about it, cat people do not need you; they choose to tolerate your presence. If you know a cat person, and they are fond of you, it is a complement and you should feel privileged. 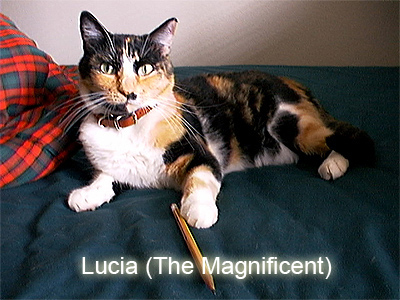 | Back to my personal page |